As I’ve promised, I continue to cover the launch of th the new HSPA network by Pelephone. In the previous post we’ve also witnessed an unexpected help from Stavik (she is helplessly busy with some unimportant things these days :-). As she has described and criticized the new advertising campaign very well, I’ll just say a few words about it and then will share a few observations, thoughts and of ciurse pics from the new campaign.

After the very very soft launch, on the last week the campaign finally started with a huge number of outdoor posters. I believe that every third billboard in the country is covered right now with Pelephone’s strange creatures. Yet, I must say that I prefer to see these creatures instead of the annoying faces of the politicians, left from the elections. After a few days A TV spot has also appeared.

Now, as I’ve mentioned before, I was very curious of the pricing strategy Pelephone would choose in order to attract customers to the new network. A visit to Pelephone‘s website has shown that the operator offers a few packages varying in number of the included minutes. All packages also include a handset and all come with 18-months contract. No evidence of any other option. Being suspicious and still curious (yes I know, this isn’t a good quality) I passed through their service center and talked to a salesperson. She offered me exactly the same packages plus an option to take a similar plan without a long term commitment. In both cases the prices were above average on the market. And still no option to get a SIM-only deal. She just said that I don’t have to take the phone – the price wouldn’t differ.

So, what do we have? 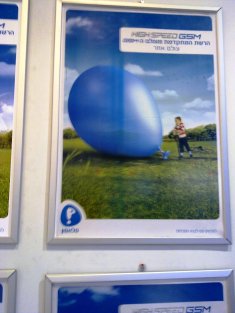 It seems that the operator has chosen the differentiating strategy. It’s message tries to convince that Pelephone offers something the competitors’ don’t. The logo “High speed GSM” is chosen due to the fact that the average consumer the the technology used by Partner and Cellcom called GSM. Hence, Pelephone is saying – our GSM is better, completely ignoring the the fact that both Cellcom and Partner have been offering this “high speed” technology (HSPA) for a few years.

The second leg of the campaign is standing on the devices offer, presenting a new range of Nokia and Sony Ericsson handsets as an inevitable part of the proposition. Indeed, they have a few nice gadgets, but being honest, I doubt this will attract the mass market consumer.

As I’ve said, the price level is above average on the market except for the unlimited data package that is a little cheaper. Generally, as Pelephone executives had promised before the launch, Pelephone tries to attract by the extra value rather than buy price cut. It doesn’t take the risk of price war and market break.

However, I’ve a guess that after an initial period, when the early adopters and impulsive buyers potential is exhausted, Pelephone will have a little choice and will probably slash the prices for very simple reasons. Today Pelephone has to run both CDMA and GSM networks with doubled operational costs. Naturally, their higher interest must be switching the old network off. So I expect a very aggressive marketing effort targeted at the existing customers. In addition’ the operator has an almost totally unutilized network, meaning that the marginal cost of every new subscriber is close to ZERO. I believe it may be wise for Pelephone to transfer aprt of that zero to the customers (in some kind of discount). Though I must admit that I don’t familiar with the figures of the elasticity of demand in Israeli mobile market. So, maybe Pelephone will manage o keep the prices high without a decrease in sales.

The absence of the SOM-only deals is not quiet clear to me. Today, in the economic turmoil. the leading carriers in the world are trying to minimize handset subsidizing and on the other hand to match people’s demand to minimize their expenses. I don’t sure how much people who are afraid to loose their job desire to buy the latest Nokia smartphone. Surprisingly, Pelephone is pushing heavily subsidized phones without any other alternative for the consumer.

I suggest that the only reason is the commitment period. While according to the new regulation rules the maximal contact period is limited to 18 months, the payments for the device may last as long as 36 months, creating some kind of longer commitment.

Yesterday I saw the first results assessments released by of one of Pelephone’s bosses. He talked about thousands of customers who had joined the new network even before the main advertising effort started. Maybe after all the offer is seen as attractive and beneficial enough! CONGRATULATIONS TO PELEPHONE!

In the last few days is seems that the operators didn’t succeed in avoiding a price war. For now, the battle is between Pelephone and Cellcom only. Cellcom offers a special price for Pelephone customers (30 agorot/min) and so does Pelepfone for Cellcom customers (34 agorot/min). Let the action begin!

This entry was posted on Sunday, March 8th, 2009 at 9:17 pm and is filed under Networks and Technology, Pelephone, Pictures, Uncategorized. You can follow any responses to this entry through the RSS 2.0 feed. You can leave a response, or trackback from your own site.